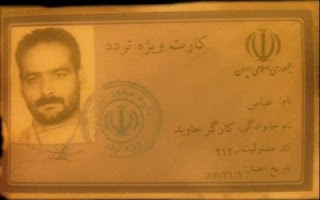 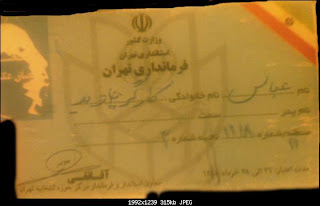 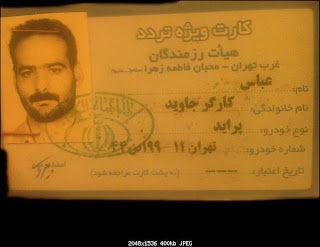 Images of three cards that have been attributed to the shooter of Neda Agha Soltan were published on the internet. I am here confirming that the photo of the individual that appears on this card completely matches the particulars that I recall of the individual who was seized by people a few minutes after Neda was shot, and who was shouting “I didn’t mean to kill her.” However, on that day, his beard had been shaved off, but he had his mustache. But in order to be 100% certain, since sometimes an innocent person is wrongly accused, we should consider another form of proof about this individual.

Because after people seized the shooter, they took his shirt off his body, and on the shooter’s back, I saw some old scars. These scars resembled the traces of wounds produced by a cutting instrument or something sharp.

Please note: I have only identified the owner of the photos. I can’t confirm his personal details. Furthermore, don’t discount the possibility of human error.
I hope that this information can help in bringing this case to justice, and likewise I call on my fellow-citizens to avoid all violence. This information is valuable insofar as it assists in the arrest of this individual. As for the rest, let the law take its course. This individual has the right to be fortunate enough to select an attorney and to defend himself. When people take the law into their own hands, they can cause unintended harm [literally “burn both the good and the bad together.”]

Again, I emphasize: do not allow anger to stain your honor in any way.