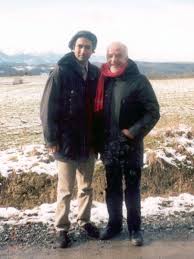 On 20 June 2009, a brief video clip was circulated all over the world. It showed the death of a young, unarmed woman called Neda, who had been shot in the chest while taking part in a protest in Tehran and was bleeding to death on the street. Few images in the contemporary world have had such an instant and powerful impact. This footage was so intense it raised the awareness of the world on what was happening in Iran and forced world leaders to condemn the way the Iranian government was treating its citizens.

For me, however, it was more personal. There was a young man in the video trying to save Neda. He was my friend, Arash.

When I met him for the very first time, I could never have imagined that this slim young man would get caught in the crossroad of history ten years later. Even if I had the power to look into the future and see that this passionate doctor-publisher-author was destined to be present in one of the most important documents of contemporary history, I couldn’t have imagined the way he would react to it. I couldn’t have imagined that he would have the courage to testify against an unspeakable crime, and be prepared to forsake everything to expose the truth.

I met Arash in Tehran in 2000 when I visited Iran. Arash was the Iranian publisher who, despite the fact that Iran has not signed up to any of the international copyright agreements, had made the decision to publish my work with my authorisation.

I was in a state of confusion when I met him. Finally I was in Iran, and while I had been looking forward to visiting Iran for some time, I had no idea what to expect. I didn’t know what the implications of my visit were going to be, or if Christina and I were in any kind of danger. However, I had made the decision to venture this visit; I already knew that I had thousands of readers there waiting for me and I was ecstatic at the thought of seeing the land of Rumi, Saadi, Hafiz and Omar Khayyam.

Having been a constant traveller, there is little to surprise me when I step into a new land. But every country has its own spirit and, until you understand that spirit, you will remain a stranger. Befriending this spirit, trying to understand it, trying to make it understand me and trying to find the inevitable bonds between this spirit and the universal soul, has been my main objective whenever I visit a new place. The older the culture the stronger the bond; and the more difficult for it to open up to a new traveller passing through. Just like Sinbad, who travelled the seven seas and each time was forced to undertake impossible challenges before the island would open up and reveal to him that this small, simple island was actually a whale of unspeakable power. It was only then that he could return home, trusting he knew the island’s secret.

Christina and I became friends with Arash and his family. While officials were trying to control what I saw and where I went, Arash tried hard to show me the true Iranian spirit. We had long conversations about what Iran was about. He took me to the secret Sufi ceremonies, passion plays and he enabled my Iranian readers to approach me and share their thoughts with me. His love for his country and his high hopes that after many years of suppression and war, a better future was appearing on the horizon, made me realise that I had made the right decision. The true spirit of Iran was the passion for literature, love, sharing and a real mastery of the universal language.

Since 2000, Arash has been a very close friend. I invited him and his wife to visit Europe with me, and the companionship of these travels helped me understand him better. We were in Madrid, in December 2000, when he, with tears in his eyes, told me the legend of Arash the Archer and how he hoped to live up to his name. Arash the Archer was an Iranian mythical hero who, in order to end the war between Iran and its invaders, put his life into his single arrow so that it could fly far enough to land on the original border between the two countries and restore peace.

Three years later, in Berlin, he told me over dinner that he thought Berlin was the ‘city of hope’. During the Cold War era, Berlin was located at the crossroad between West and East. If anything happened, Berlin, rebuilt from the ashes of World War II, would be the first city to be destroyed. That was why the spirit of the city had realised that every day could be the last day of this city and therefore, instead of living in constant fear, the Berliners had found the true value of joy and seized every moment while it lasted. Fortunately, the city lived long enough to witness the fall of the wall and the rejuvenation of a new hope. Seeing Berlin gave Arash hope that one day happiness would be possible for the people of Iran and the believe that until then, they must seize the moment.

There is always a moment in your life when you have to make a decision. I have always said that God is the Lord of the valiant, and real courage is when you make difficult decisions based on what you should do not what prudence recommends.

Did Arash live up to his name? I don’t know. But he certainly did put his life in his single arrow, the arrow that has unified the aspirations of the Iranians under that image of Neda.

But Arash’s story is not summed up in that moment: he has a story of a generation to tell. It came as no surprise when he produced an important and life-affirming memoir. In the Gaze of the Gazelle, Arash reveals the true spirit of Iran. He looks unflinchingly into the mirror and reflects on the recent past of his family and of Iran itself. More than many an historical textbook, this memoir illuminates the sense of nationhood and pride that keeps a society together despite the hardships that are thrown at it. A nation that can be stopped by nothing in its pursuit of happiness, and across thousands of years, has learned that there is no tomorrow, there is no yesterday, there’s only what you choose to do today, now, this moment.

Paulo Coelho, author of The Alchemist